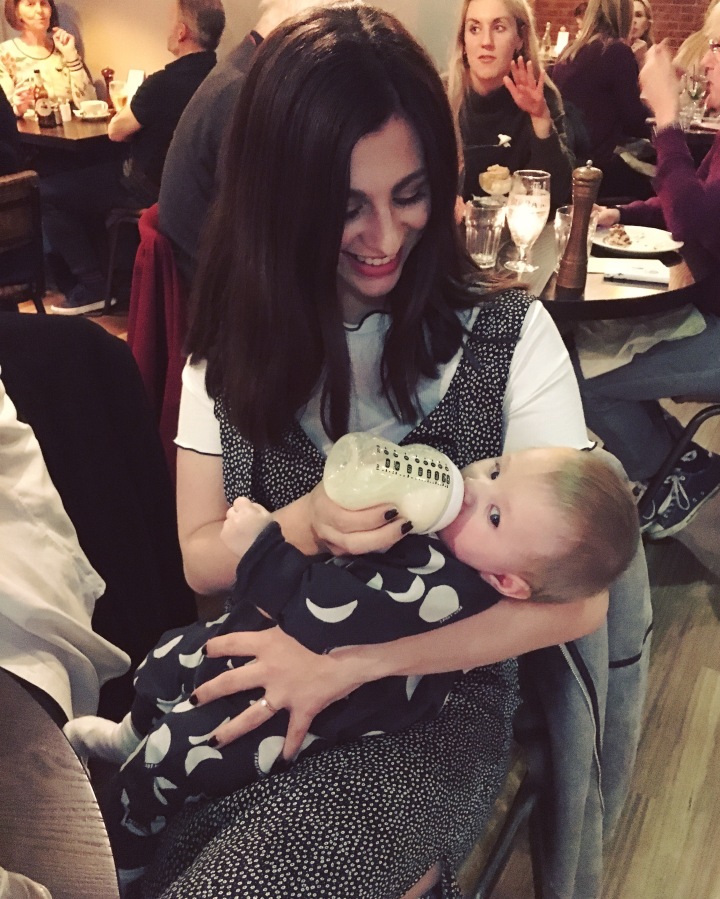 Whether you’re without baby, pregnant or a full-blown parent, it’s likely that you will have heard in some respect, about women who have felt embarrassed about breastfeeding in public. Ladies who have been made to feel uncomfortable, even ashamed, by those who deem breastfeeding offensive, sexualised and controversial. Whilst it seems baffling to think that people could hold these views in 2017, sadly some do, adding extra pressure to the already overwhelming task of keeping a small human alive in public.

Fortunately, I never knowingly encountered any negativity towards my breastfeeding. I am lucky to live in an area where clocking a woman with a baby attached to her boob is not uncommon. As a fresh new mama, pretty much every mum I saw, in baby groups, at parks, in cafe’s, seemed to be breastfeeding. And I was doing the same. It felt good. My mum was proud, my midwives were happy, the lady who did my nails was impressed. I was doing the right thing. Reinforced when people would say ‘How’s the breastfeeding going? You’re breastfeeding right? How are your boobs? It’s so nice to see a mother breastfeed her baby!’ I felt proud, and rightly so. I was using my body to feed a tiny body that had grown inside me! I was superwoman, empowered by other women around me for feeding my baby naturally. I was on a feeding high and nothing was going to bring me down.

Around 4 months in, we began to introduce a bottle of formula in the evenings. It was quite an easy decision for us to make. We had an overnight wedding approaching and in honesty, I was ready to let my hair down and hand over the reigns for a night. I gradually replaced boob for bottle and by 6 months, Malala was a bottle-fed baby and I was well rested and feeling positive about our new routine. Back at the baby groups, the parks and the cafe’s the same questions followed ‘How’s the breastfeeding going? How often is she on the boob now? Any teeth? My friends baby bit her nipple!’  The enormous pride that I had felt for feeding my baby slowly started to diminish. I found myself justifying our decision to stop breastfeeding to everybody I spoke to. ‘We had to leave her overnight. It was already  planned. I didn’t want to be running off to pump all day during the wedding.’ I was happy with my decision to stop breastfeeding so why was I worried that others wouldn’t be? I had heard about women feeling embarrassed for breastfeeding in public but never for giving a bottle. There were a few occasions where I even found myself studying the timetables of our baby groups.’If I went to baby yoga instead of music then maybe I  could get away with not getting a bottle out. If she was desperate for food maybe there would still be some milk left in my breasts?!’ Totally ridiculous.

One recent evening, Ed  ( my baby daddy) returned from some work drinks and told me of a conversation that he’d had with a colleague. It went along the lines of ‘How is the feeding going? Oh? Don’t you think she should still be breastfeeding? But you know about the benefits? The antibodies? The bonding? Of course it’s her decision, but I’m surprised she’s not.’  It shocked me. I had always known this person as open-minded and liberal so I began to really think about people’s attitudes towards bottle feeding.

Now, I am wholeheartedly behind current campaigns to encourage and normalise breastfeeding. It is, without a doubt, a woman’s right to breastfeed her baby whenever and wherever she chooses to and I am thrilled that more and more women are feeling empowered to do so. I can’t help feel however, a slight undertone which suggests women who choose not to, aren’t commited enough and are somehow letting the side down. Look at this NHS campaign that had posters dotted around Chelsea and Westminster Hospital for example.

Should we not be celebrating the choice that women now have in feeding their children rather than pitting us off against one another? I understand that promoting breastfeeding, especially in hospitals, is necessary, but should it be at the expense of those who choose not to. Does feeding the bottle make you a fat, poor woman who carries a load of stuff around? Is it really fair that midwifes are not allowed to suggest formula as an option to new mums as in hospital? That formula is not allowed to be advertised?

As mothers (and fathers), we have come so far. We have the choice how we feed our babies and should feel confident in our decisions.  I know that the women in my baby groups wouldn’t have cared if I got a bottle out, they probably wouldn’t have batted an eye lid. But for some reason, there was a seed of doubt in my head. As a first time mum, you desperately want to do a great job, be a brilliant mum, and I felt that when I was breastfeeding. But with the lack of information and support for bottle feeding and the pro-breastfeeding movement so prominent, for a brief time I felt like a second-tier mum. It got me thinking of other bottle feeders or women who aren’t able to breastfeed and I wonder if they’ve ever felt the same?

4 thoughts on “Feeling Like a Tit for Giving a Bottle”

Say Hi on The 'Gram